Meenakshi Temple Madurai is an ancient center of worship as well as an art gallery of vast proportions. Rich in traditions, festivals & art, Madurai is second to none in representing the rich cultural heritage of India. Meenakshi Temple is one of the largest temple complexes in India, from her rambling maze-like palace the Goddess Meenakshi presides over the ancient city of Madurai-the Athens of South India. But for older than the city itself is the nucleus of the temple. Far older than that, the faith that the Tour to Meenakshi Temple signifies. The grandeur of the Meenakshi Temple has remained undiminished for the past two thousand years. This sprawling and awe-inspiring temple complex is not only a marvel of architecture but also a veritable treasure trove of Indian culture and civilization. It is also one of the largest temple complexes in India. The 'city of virtue' is one of the most ancient heritage sites of India truly reflective of the cultural ethos of India. Meenakshi Aman Temple in Madurai is closely associated with the literary wealth of Classical and Modern Tamil. The crowning glory of this historic city is the sprawling Meenakshi Sundareswarar temple. Four of the 6 major streams of the indigenous system of beliefs as codified by Sankaracharya (i.e. Saivism, Shaktism, Vaishnavism and the worship of Skanda) meet in this historic city during festive occasions when the entire region is transformed into a vast space of celebration.

This temple Madurai complex sprawls over an area of 6 hectares. It also has 12 gopurams or gateways, ranging in height from 45 to 50 m, the tallest being the southern one. The southern gateway is beautifully proportioned and is nine stories high. Like the other gopurams, it is also crowded with the images of gods, goddesses, gargoyles, and gryphon's. Like the statues of classical Greece, the people who follow the ancient Dravidian culture of South India also paint their gods in brilliant colors. Thus, one can experience a myriad of colors atop these gateways.

Madurai has daily flights from Madras (Chennai) and four times a week from Bangalore. It is an important railway junction on the Southern Railway network. It is connected, through Madras (Chennai), to major centers in India. It is also connected to the major towns and cities in Tamil Nadu by bus. 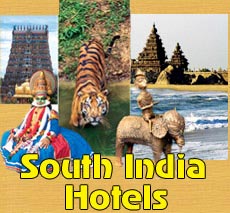